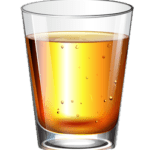 Can Coconut Oil Dissolve in Water? Separating Fact From Fiction

No, coconut oil doesn’t dissolve in water. However, this doesn’t mean that you can’t get the two ingredients to mix.

The reason that I get asked can coconut oil dissolve in water often has to do with hair care. People want to know if they can first dissolve the oil in water before applying it to their hair. Well, since I do use the oil in my own mop, I do have plenty of insight.

Below, you can learn about whether these two components can be mixed and just how to use the combination in your hair.

Is Coconut Oil Soluble in Water?

Like most oils, coconut oil isn’t soluble in water – this means that it can’t dissolve in water at room temperature.

If you are curious about why this, we will need to get scientific for a moment.

Oil molecules, on the other hand, are non-polar and aren’t attracted to the polarity of water molecules. In reality, the opposite effects take place. As oil molecules are considered to be hydrophobic, they actually repel water molecules.

This is why if you were to pour coconut water into a glass of water, you would notice that the two liquids would separate. There would be small pools of coconut oil floating within the water.

How to Mix Coconut Oil with Water

Despite these opposing features, it is still possible for coconut oil and water to be mixed to a certain degree. For this, you will need to heat the water first. This allows the coconut oil to melt a bit, allowing it to combine with the water more easily.

The hotter the water is, the more that the oil will dissolve in it. Therefore, for the best results, you may want to use water that has just reached the boiling point. Even then, though, some separation will exist as the bonds will not be completely broken.

Can You Mix Coconut Oil with Water for Your Hair?

As mentioned, I get asked about coconut oil dissolving in water mostly for use in hair. What many people don’t realize, though, is that it is actually a good thing for your hair that coconut oil doesn’t mix well with water!

However, you may want to use coconut oil as a spray to prevent frizz or flyaways. If this is the case, place some warm – not hot – water in a spray bottle and add a few drops of coconut oil. Close the bottle and shake really well.

Then, spritz the oil onto your hair as needed.

As you can see, coconut oil can’t really dissolve in water. However, you now know why this and have learned the trick of how to mix oil and water regardless of this.

If you enjoyed this post, check out our Pinterest page. We have tons of other content on coconut oil and how you can use it for cooking, skincare, haircare, and more!

ABOUT THE AUTHOR
Riya Borah
Nutritionist Educator | Riya Borah is a nutritionist educator and her job involves guiding people towards a healthier lifestyle. Growing up in India, Riya was aware of just how much coconut was used on a daily basis. This encouraged her to research the properties of this versatile drupe. It opened her eyes to both the limitation and possibilities of coconut. Her aim is to now educate as many people as possible about the best ways to utilize coconut in their own lives.
Related Articles
Coconut Oil for Penis: Can You Use It For Enlargement, Lube, and More?
Knead Your Stress Away with the Best Coconut Oil for Massage
Coconut Oil for Cradle Cap: The Do’s, Don’ts, and Everything in Between
An Important Disclaimer
The information on this page should not be used as a substitute for professional medical advice. Consult a doctor if you wish to consume any kind of tea regularly for the purpose of treating any condition or illness.
Affiliate links / Images from Amazon Product Advertising API. For the Love of Coconut is a participant in the Amazon Services LLC Associates Program, an affiliate advertising program designed to provide a means for website owners to earn advertising fees by advertising and linking to amazon (.com, .co.uk, .ca etc) and any other website that may be affiliated with Amazon Service LLC Associates Program. As an Amazon Associate I earn from qualifying purchases.
Copyright © 2022 · For The Love of Coconut · All Rights Reserved